“What does this mean in terms of hand protection?”

What is the AQL of your nitrile or latex glove (Acceptable Quality Level)?

Single-use protective gloves or disposable gloves are commonly used in laboratory and cleanroom environments, but how certain are you that your hands are well protected? There is a simple way to find out how well you are protected: look for the AQL of your nitrile, neoprene or latex gloves.The acronym AQL frequently appears on the laboratory glove dispenser or on cleanroom glove bags followed by numbers such as 4.0, 1.5, 0.65 or even 0.25 and alongside these figures there will often be a performance level. Usually, they refer to the results of a water or air penetration test that is undertaken to detect microporous holes. This test is carried out according to the methodology detailed in ISO 374-2:2019 and is important for giving users a certain level of protection against pinholes, tears, and other weak points.

If your nitrile gloves or latex gloves comply with the standards for protection against chemical and biological hazards (as defined by ISO 374-1:2016+A1), then there is an obligation for the disposable gloves manufacturer to indicate the level of AQL on the packaging.

AQL is determined through a sampling procedure: as not all nitrile or latex gloves in a batch can be individually checked, a certain number of disposable gloves is taken from each production lot for testing. Thus, depending on the level of AQL, the maximum percentage of defective products considered as acceptable in a manufacturing batch will be defined. Samples are tested in accordance with ISO 374-2:2019 (as part of the Personal Protective Equipment (PPE) Regulation (EU) 2016/425) or EN 455-1:2000 (as part of the Medical Devices Regulation (EU) 2017/745). The water penetration resistance test is one of the most used procedures for determining the acceptable level of quality for microporous holes. Based on the results of these leak tests, an assessment of the quality of the total production can be concluded. The assumption that through random sampling, a level of statistical probability will be achieved for the entire batch is known as confidence interval. The sampling procedure must therefore strictly comply with the sampling plan, which means that the number of samples will be different depending on the size of the lot and the level of AQL sought.

What does the AQL level mean in terms of protection?

If we accept that the glove’s barrier performance of a nitrile glove or latex glove is crucial for working in a laboratory and that the best way to measure it is to perform tests for pinholes, then AQL is extremely important. The lower the AQL, the higher the level of protection. Thus, by choosing a single-use glove manufactured to an AQL of 0.25, the level of protection is likely to be better than a glove whose AQL is 0.65, 1.5 or 4.0. It is therefore important to know the AQL level of your gloves to select those which offer the highest level of protection for you and your colleagues.

Table A.1 of Annex A of ISO 374-2:2019 outlines the range of AQL (AQL 4.0, 1.5, 0.65 or lower depending on the acceptable product defects) and the required inspection levels. Thus, we can see that for an AQL of below 0.65, it will be necessary to comply with the requirements of a G1 inspection level.

Table A.1: Annex A (ISO 374-2:2019) on inspection levels and acceptable quality levels in a Quality Assurance procedure used for the manufacture of disposable gloves

The table below (Table 2) establishes the sample size. Each inspection level corresponds to a code letter (from A to R). For a batch for example, between 150,001 and 500,000 disposable gloves (which is the approximate volume of a typical batch of disposable gloves) and for a required AQL of less than 0.65, the inspection level, according to the requirements of ISO 374-2:2019, will therefore be G1. The sample size can then be decided by referring to the letter “M”.

Step 3 – Performing the test on the samples

We can see that selection of the batch size and inspection level leads us to the letter code, which in this case is “M”. From the table below (Table 2-A), the letter code “M” informs us that the number of samples to be taken is 315. If the selected AQL level is <0.65 we can read in the corresponding “Normal Inspection” column, the numbers 5 and 6. This means that the batch is acceptable up to 5 defective gloves and will be rejected if there are 6 or more. In summary, for a batch of 400,000 nitrile or latex gloves, if we operate with a G1 level inspection level with an expected AQL <0.65, then we will have to test 315 disposable gloves. If there are no more than 5 defective gloves, the lot will be accepted. If there are 6 or more defective gloves, the lot will be rejected and cannot be sold. 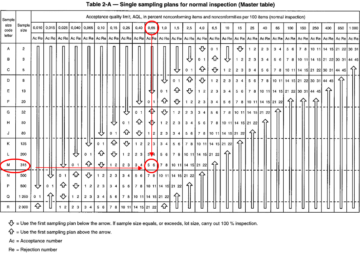 It should be noted that ISO 2859-1:1999 refers to “Tightened, Normal and Reduced” inspection levels on the assumption that if several batches have been accepted successively, the increased level of confidence in the system causes the disposable glove manufacturer to make fewer mistakes.

If, for example, 5 successive batches are “good” then the inspection level can change to the so-called “Reduced” level. If we take our example of a batch of 400,000 laboratory gloves or single-use cleanroom gloves with an AQL <0.65 and an inspection level G1, we will have, according to the table below “Table 2-C” to evaluate 125 gloves instead of 315. Conversely, if we successively reject 2 lots, we will then move to a “High” inspection level and in this case, according to the table below “Table 2-B”, the sample size will remain the same (315) but the criteria for acceptance or rejection of the batch will be more severe (3 and 4 instead of 5 and 6). 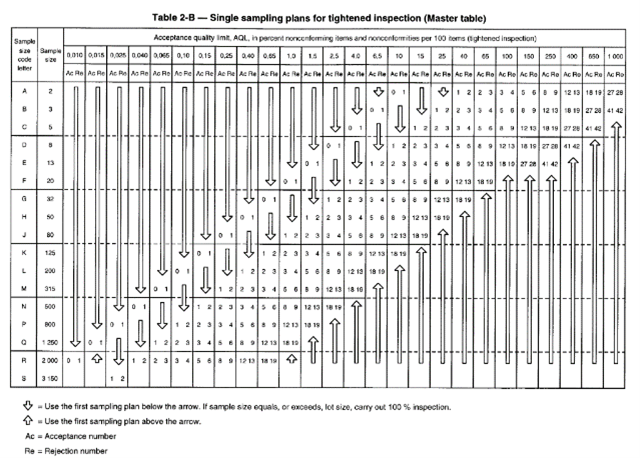 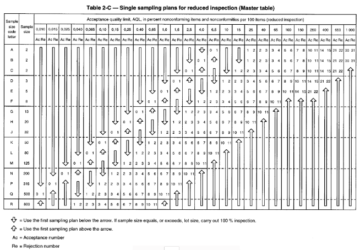 Single-use gloves can be certified either as MD or PPE or can have dual registration. The test procedures for the detection of microporous holes are described respectively in EN 455-2:2015 for MD gloves and in ISO 374-2:2019 for PPE gloves. Although the sampling of the 2 types of gloves refers to ISO 2859-1:1999, a “general inspection level” of 1 (G1) is required and the AQL must be at least 1.5, EN 455-1:2000 requires a sample size corresponding to the letter code “L”. If we take our example, for a batch of 400,000 gloves, the sample size corresponding to the letter “L” will be 200 with the number of products accepted/rejected respectively of 7 and 8 (instead of 10 and 11 for the letter M). This means that sampling procedures in some circumstances may be more stringent for disposable “Medical Device” gloves than for disposable “PPE” gloves.

As many nitrile gloves or disposable latex gloves used in laboratories or cleanroom workplaces are tested against ISO 374-2:2019 as part of their registration process as Category III PPE, the identification of AQL should be relatively easy. We have also seen that AQL is a statistical method for determining the quality of a glove (as defined in ISO 2859-1:1999) and that the detection of pinholes is of paramount importance for assessing the barrier properties of a nitrile glove or latex glove.

Everyone has experienced electric discharge by touching an object or something else. This is called […]