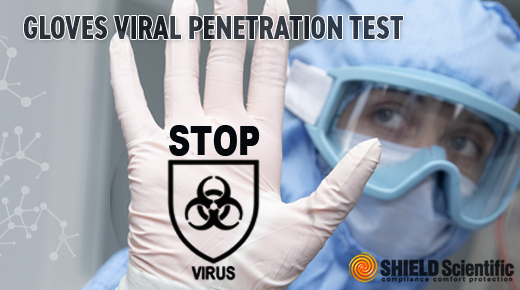 Many viruses, responsible for human diseases, circulate continuously throughout the world (Common cold, flu, Covid-19, Ebola, …). Viruses are part of the microbiological risks (such as bacteria or fungi) requiring the wearing of appropriate protection by professionals exposed to them, whether in the field of healthcare or research. Thus, disposable gloves designed for protection against viruses should display the word “VIRUS” under the pictogram denoting biological risk, thereby demonstrating that they have passed the ISO 16604:2004 viral penetration test (Procedure B).

There are 2 categories of gloves:

Some single-use gloves are dual registered as PPE and MD. Regardless of the regulations, disposable gloves are tested against various standards to ensure compliance with these European regulations.

Regarding protection against microbiological risks:

For gloves protecting against viruses, it is mandatory that the word “VIRUS” is displayed under the pictogram identifying protection against microorganisms. 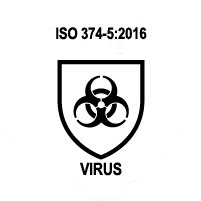 If the gloves are marked “VIRUS”, users can be assured that the gloves have passed the viral penetration test using a Phi-X 174 bacteriophage and performed in accordance with ISO 16604:2004 Procedure B.

WHAT IS THE GLOVE VIRAL PENETRATION TEST?

The size of the viruses (typically from 0.01 to 0.4 μm) may enable them to penetrate through microporous holes in standard single-use gloves. It may therefore be desirable for professionals wearing disposable protective gloves against microbiological risks to ensure that their gloves have passed the viral penetration test.

This test consists of exposing a glove sample to a liquid suspension containing the bacteriophage Phi-X 174 during a sequence of successive durations and pressures. To be considered successful, no passage of viruses must be detected.

The viral penetration test is not a mandatory test but if it is not carried out, the manufacturer must display on the packaging “not tested against viruses”.

WHAT ARE THE KEY STEPS OF THE VIRAL PENETRATION TEST? 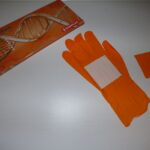 Three test specimens are selected and cut into squares with a minimum dimension of 70 mm. Each specimen has to be conditioned for a minimum of 24 h by exposure to a temperature of 21°C (+/- 5°C) and a relative humidity of 60% (+/- 10%). Other preconditioning options such as sterilization can be used. 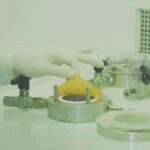 Penetration cell is closed and mounted in a vertical position in test apparatus.Specimen is exposed to the bacteriophage challenge suspension using a specific pressure and time sequence related to Procedure B. The latter is specifically designed for testing materials of an elastomeric nature such as gloves. Testing is as follows:

Visual detection of penetration is supplemented with an assay procedure that will detect viable viruses which penetrate the material even when liquid penetration is not visible. Any evidence of viral penetration for a test specimen constitutes a failure.

WHAT ARE THE LIMITATIONS OF THE GLOVE VIRAL PENETRATION TEST?

It should be noted that the gloves undergo no physical stress when subjected to this test. Therefore, it may be prudent to give yourself a safety margin in terms of deciding when to discard gloves and replace them with new ones! The information given is for guidance only and may not reflect the user’s application. A risk assessment should always be made by the user to assess the suitability of gloves for a specific application.

SHIELD Scientific offers a wide range of single-use nitrile and latex laboratory and cleanroom gloves that protect against biological hazards. All of SHIELD Scientific gloves have passed the viral penetration test. In addition, SHIELD Scientific offers gloves with an AQL of 0.25 or level 3 according to ISO 374-2:2019 to address the highest biological risks. This level of protection for standard laboratory gloves is exceptional and provides increased confidence in compliance with biosecurity procedures. For more data, please check our online glove selection guide on our www.shieldscientific.com website.

Everyone has experienced electric discharge by touching an object or something else. This is called […]